October 28, 2009
For Halloween this year, my youngest son decided to be Lightning McQueen from Pixar's "Cars" movie. Here are a few of the details of the costume construction process. First, a picture of the costume: 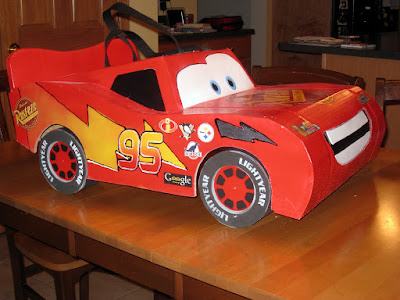 My basic concept was to create a Lightning McQueen car that he could wear around his waist, with straps over his shoulders as support. I decided to build it out of corrugated cardboard, which I hoped would be sturdy, but still reasonably light (and obviously easy to work with). I had an old large box made of double corrugated cardboard which had plenty of material. 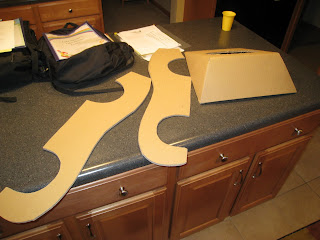 Using his matchbox-sized car as a model, I sketched out a profile of the body, and cut it out using a jigsaw. I used two sides of the box, one on top of the other to get two identical profile shapes. Additionally, I cut out a flat shape that I folded and glued into the top (cockpit?) of the car.  I cut a hole in that top portion to fit around his waist. 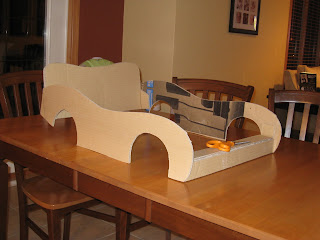 Next, I attached the two sides by creating a front brace, and a rear spoiler.  I wanted to make this part of the car slightly wider than the top I had already cut out to mimic the curves of the toy.  I used hot glue for most of the cardboard assembly as it's strong enough sets up quickly. 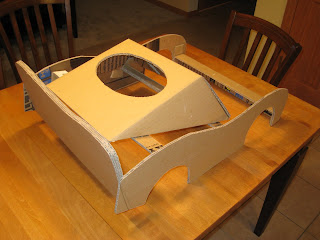 Once I had the basic frame, I needed to attach the top of car to the frame.  I created two braces by cutting long strips of corrugated cardboard.  Each brace was made up of two strips: 1 long enough to go between the sides of the frame, and a slightly shorter piece to fit inside the top of the car.  I glued the two strips together, leaving small ends that I bent at 90 degrees upwards and downwards respectively as gluing surfaces.  These strips proved sufficient to keep the top in place until I could "skin" the frame to create a more rigid figure. 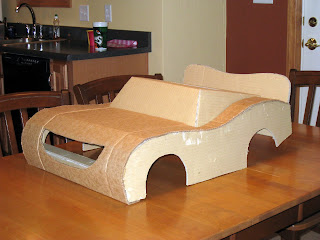 Next, I wanted to cover the top of the frame around the cockpit.  I decided to do this with two pieces, 1 piece for the hood, and one piece for the sides and back of the car (between the spoiler and the cockpit).  For both parts I cut pieces from thinner cardboard to allow it to bend around the curves of the frame more easily.  Even with this, I pre-rolled the cardboard around a 4" piece of PVC to give it some curve.  This ended up making a number of discrete bends in the cardboard as opposed to a smooth curve, but the effect is sufficient.
I cut the hood piece slightly wider than I needed to make it easier to glue on.  I hot glued the edges a few inches at a time, held the top cardboard in place, and then moved on.  Once I was all done, I went back with the jigsaw and trimmed off the excess.  At this point, I also cut out a hole in the front of the car for Lightning McQueen's mouth.
I followed a similar process to skin the back half of the car, doing rough measurements to cut out the appropriate amount of material to fit around the cockpit of the car.  There was a bit of fiddling around to get it fit, but close enough was good enough.  With the top glued in place, the whole costume started to feel much less flimsy than before. 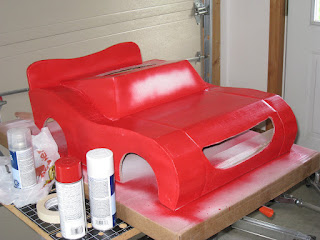 With the car taking shape, I wanted to do a little extra prep before painting.  I covered all of the exposed cardboard edges with masking tape, leaving as few seams as possible.  I also filled in a few of the small gaps around the cockpit of the car.


Now time to paint.  I used two base coats of white primer (spray paint).  It's hard to get a smooth looking finish on cardboard, so I wanted a good base.  Next, I painted the entire costume bright red, leaving much of the windshield unpainted. 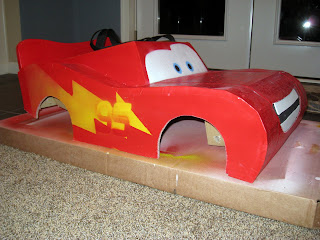 To create the eyes, I simply drew the shape I wanted at full size on a scrap piece of poster board, and cut it out.  I placed the mask over the windshield, and sprayed it with white paint.  After it dried, I saw a little paint had leaked under the mask creating a fuzzier line than I wanted, so I took the piece I had cut out of the poster board, laid it over top of the windshield, and sprayed around the edges again with red.  This cleaned up the line nicely.


For the lightning bolts on the side, I masked them out using painters tape, and newspaper.  I tried to achieve the gradient affect by spraying from front to back with the yellow paint, using less coverage as I went back.


I sprayed the numbers on the side of the car using a similar masking technique as I had for the windshield, again trying to get a bit of a gradient from yellow to red going upwards.


I used spray paint and small circular masks to paint the eyes (blue first, then a smaller black circle for the pupils).  When they were dry, I added a bit of detail with a black sharpie, and a tiny dab of white paint in each eye for the specular reflection.  I think that makes a huge difference.


At this point, I finished the mouth.  For this, I glue a piece of black poster board to the inside of the costume covering the opening I had made for the mouth.  Then, I cut out two strips of white craft foam for the top and bottom row of teeth, and glued them onto the poster board.  Doing this as opposed to simply paint/drawing the mouth gives it a little extra depth.

At some point, I added straps by simply running nylon strapping down through the top of the cockpit, and hot gluing the ends inside the costume.  I glued the straps so that they cross in the back, so that they won't slip off of his shoulders.  The toughest part of this job was getting my son to stand still long enough for me to get the length of the straps right. 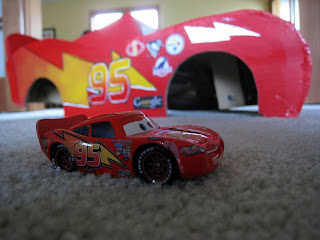 I used some craft paints we had lying around to outline the numbers and lightning bolts, getting my kids to help along the way.  In retrospect, I think this would have been better done with paint pens or sharpies, as the paint we were using had a tendency to glob as we were applying it, and it was pretty tough to get straight lines.  But the kids had fun helping here, so I'm perfectly happy with it.


I was able to find a vector drawing of the Rust-eze logo online (brandsoftheworld.com), which I printed out for the hood.  I placed it down originally using spray glue, but then went over the edges with Modge Podge to make it more secure.


For the racing sponsor logos behind the wheel wells on both sides, I simply printed out the graphics I wanted at an appropriately small size, cut them out, and applied the with Modge Podge.  I had never used Modge Podge before, but it worked wonderfully.  It acts as both a glue and a top coat/sealer, drying perfectly clear and giving the logos a laminated feel.  I used the exact same process for the Rust-eze logos behind the rear wheel wells, and the back of the spoiler.  For the iconic lightning bolts above the front wheel wells, I used aluminum foil, and more Modge Podge. 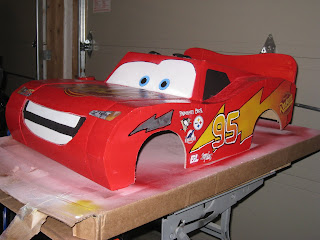 For the last of the body details, I masked off (using painters tape) areas for the side windows, and simply painted them black.  I also created headlight graphics, and applied them with the same coating technique as the rest of the decals.  After everything was dry, I sprayed the entire costume with multiple coats of clear high gloss finish for a nice shiny look.  I'm also hoping this makes it more resistant to moisture in case there's a little rain. 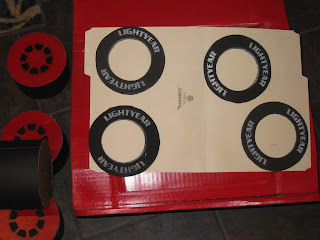 For the wheels, I decided to make them have some real width as opposed to simply cutting out discs.  I created the wheels by cutting out 8 circular discs, two for each wheel.  I painted half of the discs red, and then added small black accents to make them look like hub caps.
I cut squares of 1" thick Styrofoam insulation, and used them to separate the two discs for each wheel.  Then, I covered the outside of each wheel in black posterboard, using hot glue.
Finally, I cut out "tires" from 3mm black craft foam, and spray painted (again using a paper mask/stencil I created) the Lightyear logo around each.  I glued a tire to each hubcap to finish the wheels.


I attached the wheels to the car by creating supports out of more cardboard.  The supports are glued to the inside of the costume, and hang down to about the center of wheel wells.  I then drilled a hole in each support, and ran a dowel rod through them.  The wheels were then also drilled, and glued onto the dowel rod.  It was difficult to get everything lined up center, but the wheels do partly spin.  Ultimately, it was probably not worth the extra effort and complexity, but I'm not completely unhappy with the results.


In the end, this turned out better than I initially expected.  The costume fits fairly well, and isn't too heavy (although a night of trick-or-treating will tell the real tale).  Almost all of the materials I used I had lying around from previous projects, and so the cost was minimal (less than $15, mostly for paint and the dowel rods). 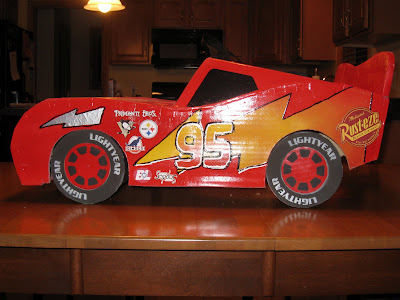